This cDNA library (plasmid DNA) is constructed from poly(A) RNA derived from Schizosaccharomyces pombe, strain h-L972 after treatment with HU (hydroxyurea), γ-radiation, and MMS (methylmethane sulfonate). It is constructed by the Linker-Primer method (Ref.1) by Professor Hiroshi Nojima of Research Institute for Microbial Diseases, Osaka University.  This library is unidirectionally cloned by using the oligo (dT)18 linker primer which contains the restriction enzyme site of Not I, and BamHI (Bgl II)-Sma I adaptor.

The pLZ3 vector used in this library can replicate both in S. pombe and in E. coli, and express cloned genes not only in S. pombe but also in mammalian cells as it contains SV40 promoter. It also contains f1 ori which is necessary for ssDNA synthesis, and bacteriophage T7 and T3 promoter for RNA synthesis (see Figure and Ref.2).

* This library is to be used only by the researches of the purchaser. It is not allowed to amplify and transfer the library to a third person. 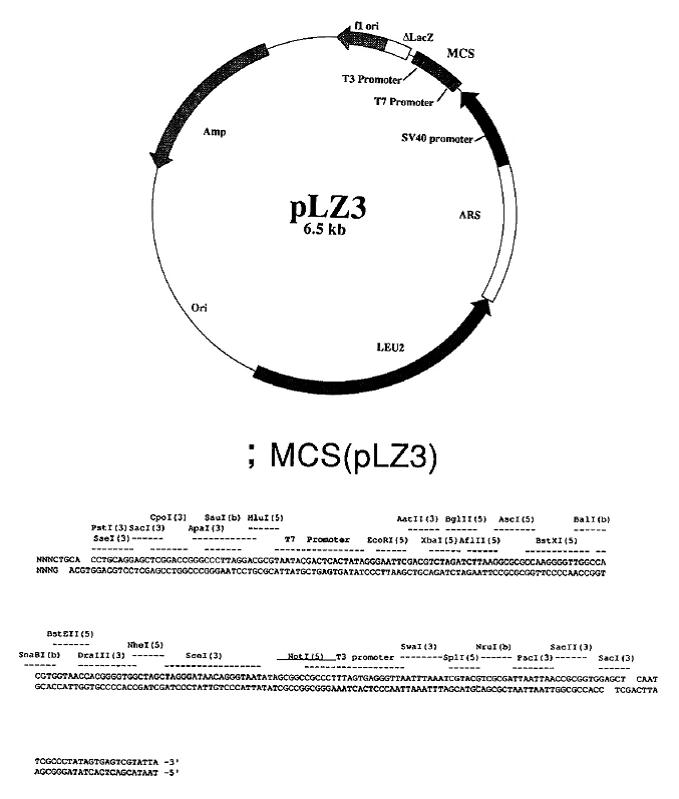 Fig. Structure of pLZ3 and the restriction sites