Amyotrophic lateral sclerosis (ALS) is one of the most common degenerative disease of the motor neuron system.The TDP-43 pathology seems to be a dominant type of pathology acro Beta sporadic ALS types. Innoprot has developed a novel fluorescence cell-based a Betaay for High Content Screening that allows the quantification of pathological TDP43 globs into the nucleus and cytosolInnoprot offers this cell line as a stable cell line but it is also offered as vials of division-arrested cells (DA cells) in order to perform a small number of assays. Each vial of these DA cells contains 2 million cells, an enough number of cells to perform a complete experiment in a 96 well-plate.Assay Details: U2O2 cells stably express human TAR DNA-binding protein 43 (TDP-43) were induced with IPTG 5mM during 48h to produce the hTDP43-tGFP protein. Subsequently, cells were incubated with the compounds at 10 mM during 24 hours and then, cells were treated with 250 uM sodium arsenite during 90 min to induce the stress granules formation. The TDP43-tGFP nuclear globs were quantified using the BD Pathway HCS Reader and Attovision Compartmentalization Software. Error bars represent the standard deviation among 3 replicate wells.Results indicate that the detecting dynamic range is dependent on the inhibitor biophysics and biochemical characteristics and the treatment time. This stress granules assay was validated with an average of Z= 0.62+/- 0.01 for High Content Screening with a 24 hours treatment. The stably transfected TDP43 cell line can be used in drug discovery for pathological globs formation inhibitors.This model permits to evaluate the TDP-43 protein distribution in living cells studying the protein localization pattern in the space and time.This model provides a strategy to evaluate drugs that not have cell permeability.This cellular model have been adapted to HCS analyses based on image algorithms to test cytosolic and nuclear globs generation process. 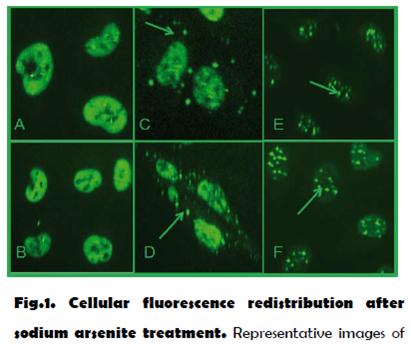 Fig 1: Cellular fluorescence redistribution after sodium arsenite treatment. Representative images of the negative controls show a nuclear distribution of the fluorescence (A,B). However, after sodium arsenite treatment the phenotype turns into a cytosolic vesicular pattern corresponding to stress granules (C,D) and into an intensive nuclear globs pattern (E,F). 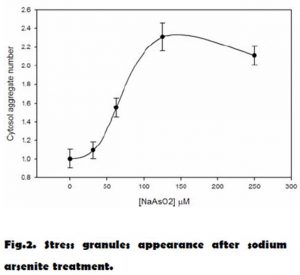 Fig 2: Stress granules appearance after sodium arsenite treatment. Cellular model was treated with 5 mM of IPTG during 72 h to induce the TDP43-tGFP express. After that, the cells were treated with a range of sodium arsenite concentrations from 25 to 300 uM during 90 min. TDP43 containing stress granules was quantified using the BD Pathway HCS Reader and Attovision Compartmentalization Software. Error bars represent the standard deviation among 3 replicate wells. Z= 0.62+/- 0.01 for High Content Screening.