Dnmt3b (DNA (cytosine-5-)-methyltransferase 3b) has a role in the establishment and regulation of tissue-specific patterns of methylated cytosine residues (epigenetics). Dnmt3b is thought to function in de novo methylation, rather than maintenance methylation. The protein localizes primarily to the nucleus and its expressions are developmentally regulated. Mutations in this gene cause the immunodeficiency-centromeric instability-facial anomalies (ICF) syndrome.

This antibody was prepared and characterized by Prof. S. Tajima of Osaka Univ. and used in Ref. 2~4.

Antibody:  Affinity-purified with the recombinant Dnmt3b

Reactivity: Reacts with mouse Dnmt3b. It may also react with other rodent homologs due the sequence homology, but it does not react with human homolog due to the sequence difference.

References: This antibody was used for Western blot and immunohistochemistry in Ref. 2~4.

The data of Western blot and immunofluorescence staining obtained by using this antibody are shown in the next page. 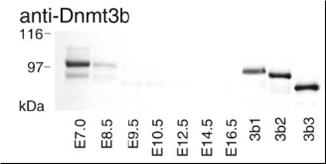 The amounts of Dnmt3b in mouse embryos at the stages of E7.0-E16.5 were examined by Western blot. The embryos were solubilized by sonication or homogenization in the presence of 0.1% SDS. The dissected embryo (10 µg protein) at each stage was subjected to Western blot with this antibody. Dnmt3b was highly expressed in E7.0 embryo but decreased thereafter and was below the detection level after E10.5. cDNAs of Dnmt3b isoforms (3b1, 3b2, and 3b3) were transiently expressed in 293T cells and these isoforms were also detectable with this antibody. 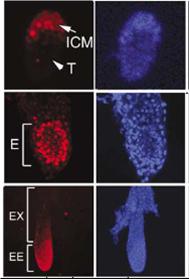 Fig. 2 Expression of Dnmt3b in mouse embryos was examined by immunofluorescence staining.

Mouse embryos at E4.5, 5.5 and 7.0 were fixed in cold acetone and stained with this antibody or DAPI (blue). The antibody was detected with anti-rabbit IgG conjugated with AF-568 (red). The ICM (the inner cell mass) and trophectoderm (T) are indicated by arrows and arrowheads, respectively. The epiblast (E), and the embryonic ectoderm (EE) and extraembryonic region (EX) are indicated by square brackets. Dnmt3b existed at E4.5-7.0, in ICM at E4.5, the epiblast at E5.5, and the embryonic ectoderm at E7.0.