Background: Hemagglutinin (HA) binds to sialic acid-containing receptors on the cell surface, bringing about the attachment of the virus particle to the cell. It plays a major role in the determination of host range restriction and virulence. It is a Class I viral fusion protein responsible for penetration of the virus into the cell cytoplasm by mediating the fusion of the membrane of the endocytosed virus particle with the endosomal membrane. Low pH in endosomes induces an irreversible conformational change in HA2, releasing the fusion hydrophobic peptide. Several trimers are required to form a competent fusion pore.

HA consists of 584 amino acids with molecular mass of 63,275. In natural infection, inactive HA is matured into HA1 and HA2. By sequence similarity it is indicated to be palmitoylated.

Immunogen: Human Influenza B Virus strain Nagasaki/1/87, one of the strains of B/Victoria group.

Reactivity: According to Ref. 1 below, during the 1996-97 Osaka epidemic the 1H12 antibody reacted with HA proteins from most of the Influenza B virus isolates belonging to Victoria group (70/73 strains) and none of 27 isolates belonging to Yamagata group, as shown by PAP staining. It also reacted with Victoria group vaccine strains Shangdong/7/1997 and Malasia/2506/2004.

No cross reactivity with any strains of influenza A viruse.

References: This antibody was described and used in the following references.

Samples were taken at 24 hours post-infection. Anti-Influenza B Virus HA antibody (clone 10B8) efficiently detected HA in the B/Malasia/2506/2004 virus (Victorial group) but not in B/Florida/4/2006 virus (Yamagata group) infected MDCK cells. The cells were fixed with 4% paraformaldehyde in phosphate-buffered saline (PBS) and permeabilized with 0.1% Triton X-100 in PBS. The bound antibody was visualized by a further reaction with an Alexa Fluor 488-conjugated secondary antibody. Images on the left are mock-infected MDCK cells as negative control. 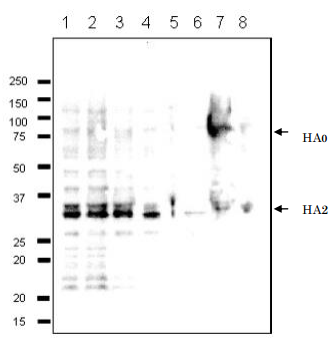