Tubulin is the major constituent of microtubules. There are three members (α, β, γ) and two subtypes (δ, ε) in the tubulin family. Of these members, Gamma tubulin (451aa, 51KDa) is found at microtubule organizing centers (MTOC) such as the spindle poles or the centrosome, suggesting that it is involved in the minus-end nucleation of microtubule assembly during cell cycle.

Reactivity: Reacts with gamma-tubulin of Xenopus, human and rodents

Purification: Affinity-purified with the immunogen peptide conjugated with agarose.

References: This product is described and used in the following reference.

Fig. 1. Identification of endogenous γ-tubulin in a Xenopus mitotic extract by western blot

The primary antibody was used at 1/1,000 dilution 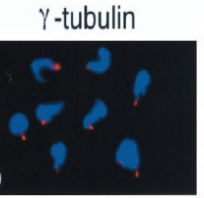 Fig.3 Immunofluorescent staining of γ-tubulin accumulated at sperm centriole in demembranated Xenopus sperm heads which have been incubated in a Xenopus egg mitotic extract containing nocodazole. γ-Tubulin is stained red and sperm chromatin is stained with DAPI (blue). Anti-γtubulin (Xenopus) was used at 1/100 dilution

Fig.4 Immunofluorescence staining of γ-tublin in Hela cells by using this anti-γ-tublin antibody. The first antibody was used at 1/100 dilution. As second antibody goat anti-rabbit IgG conjugated with Alexa Fluor 488 was used at 1/1,000 dilution.