Hepatitis C virus (HCV) is a small (55-65 nm in size), enveloped, positive sense single-stranded RNA virus in the family Flaviviridae and the principal cause of parenteral non-A, non-B hepatitis. The virus genome consists of a single open reading frame of approximately 9.4 kb which encodes a single polyprotein of about 3,010 amino acids (1, 2, 3). The polyprotein is processed by host cell and viral proteases into four structural proteins (core, envelope 1 and 2, and p7) and six non-structural proteins (NS2, 3, 4a, 4b, 5a, and 5b) necessary for viral replication. HCV core protein (191 aa) is not only a component of nucleocapsid but also has multiple functions and is thought to be a pathogenic factor for hepatitis. It also participates in some cellular processes, including transcriptional regulation and cellular transduction. HCV core antigen is used as diagnostic marker for HCV infection.

Specificity: Specific to human HCV core antigen of genotype 1b. Not tested in other genotypes

References: This antibody (unconjugated) has been used in ref.4 and 5.

Chimp liver cells were infected with recombinant vaccinia virus containing a HCV genome cDNA and were subjected to Western blot using this antibody. The core protein is detected as a 22-kDa band. 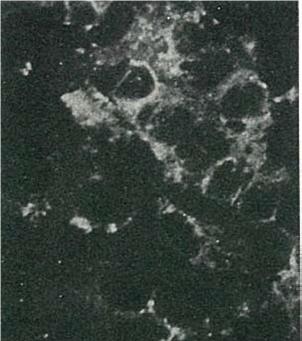 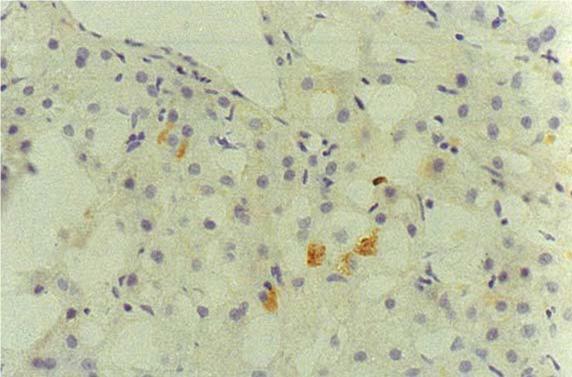 Tissue section from a patient with chronic hepatitis C was immunostained to reveal cells expressing HCV core antigen, which are scattered in the lobules (indirect immuno-histochemical method, counterstained with Mayer’s hematoxylin).